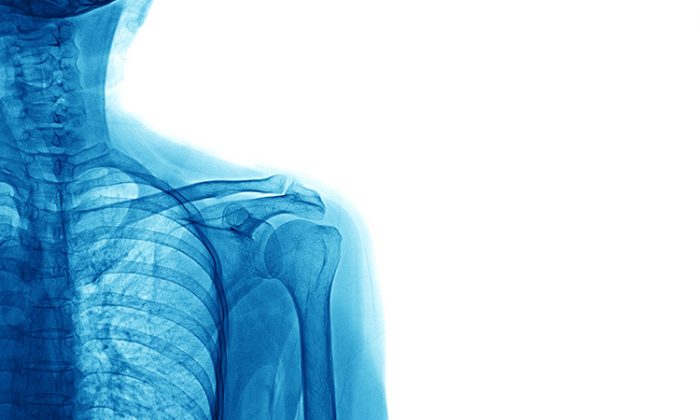 What is a frozen shoulder?

Frozen shoulder, or adhesive capsulitis, is a condition that causes pain and restricted movement in the shoulder. The joint of the shoulder is held together by a joint capsule, which becomes thickened and results in a global restriction of shoulder movement. This manifests with shoulder motion being stuck or frozen in all planes of motion, and loss of motion especially in external rotation is an early sign.

Who can get frozen shoulder?

Various other triggers have been associated with adhesive capsulitis, including trauma, surgery (not just limited to the shoulder), stroke, thyroid disorders, and other inflammatory diseases. Periods of immobilization are also a risk factor for adhesive capsulitis (Bruckner & Nye 1981).

What are the symptoms of frozen shoulder?

How is frozen shoulder diagnosed?

The diagnosis of frozen shoulder is typically made clinically, and often by the diagnosis can be made by testing the range of motion in the shoulder.

X-rays and an MRI can differentiate frozen shoulder from alternative causes of shoulder pain such as osteoarthritis, posterior shoulder dislocation, rotator cuff calcification or tumors.

Will frozen shoulder resolve on its own?

Historically, patients were reassured that frozen shoulder will resolve with conservative treatment or observation. In some reports, frozen shoulder resolved in 94-96% of patients over a 2-year period or longer (Grey, 1978; Vastamaki et al. 2012).

What are common treatments for frozen shoulder?

The stage of the disease process influences treatment options. Often medications and early activity are the first-line treatments. Physical therapy is often prescribed and joint mobilization with a therapist has been shown to be better than stretching exercises alone (Celik & Mutlu, 2016). In the majority of patients, 60-95% respond to a combination of therapy or medications (Schoch et al. 2020).

Are there alternative treatments to cortisone injections or surgery for frozen shoulder?

Shoulder hydrodilation or high-volume shoulder distension is a non-surgical treatment for frozen shoulder. The treatment involves injecting a high volume of saline and local anesthetic into the glenohumeral joint under ultrasound guidance. The objective of the treatment is to physically expand or distend the joint capsule, but the exact mechanism of the procedure is debated.

One study has shown that a high-volume distention of the joint capsule combined with mobilization and a corticosteroid injection was the most effective treatment for adhesive capsulitis (Park et al. 2014). Other studies have now shown clear superiority, but technique, volume of injectate and post-procedure manipulation may account for some of the variability in the outcome of these studies (Tveita et al, 2008; Sharma et al 2016). In one study, high-volume dilation without manipulation is less effective than intensive manipulation alone suggesting that the technique and protocol used by your physician matters (Park et al. 2014).

In one study comparing surgery to high-volume distention both groups of patients had significant improvement in range of motion and there was no significant difference in pain scores (EQ-5D VAS) at any time point (Gallacher et al. 2018). While surgery did have a significant improvement in the Oxford Shoulder Score, the results were otherwise comparable between non-operative management with high-volule shoulder dilation and surgery. High-volume dilation should be considered before surgery.

Carette S, Moffet H, Tardif J, et al. Intraarticular corticosteroids, supervised physiotherapy, or a combination of the two in the treatment of adhesive capsulitis of the shoulder: a placebo-controlled trial. Arthritis Rheum. 2003 Mar; 48(3):829-38.

Alternatives to Achilles Tendon Surgery: The role of PRP and Tenex

Achilles tendinopathy is a common cause of ankle pain, and platelet rich plasma (PRP) and percutaneous needle tenotomy with Tenex are increasingly being used to treat this condition.

Sacroilic Joint Pain: How Does PRP Compare to Steroids

Sacroiliac joint (SIJ) pain is a under recognized cause of low back pain. The SIJ has been implicated as the primary source of pain in 10 to 27% of patients with low back pain below the L5 vertebra (Simopoulos et al